Our latest development Rubaiyat of Omar Khayyam (رباعیات عمر خیام) is released on Microsoft Store, It is the second app in a series of Persian literature apps by the name of Davavin.

You can find more on Apps & Games page.


Hafez Shirazi [Shams-ud-din Muhammad Hafiz] (c. 1320-1389) is one of the most beloved poets of the Persians. He is considered by many - from different cultures - to be one of the seven literary wonders of the world. Both Goethe and Emerson translated Hafez. And after Goethe’s deep study of him, he stated: 'Hafez has no peer'. And Emerson gave Hafez that grand and famous compliment, 'Hafez is a poet for poets'. Hafez poems were also admired by Nietzsche, Arthur Conan Doyle and many others.


Also We are currently working on developing an awesome web site for Davavin and its apps, which will be coming online in the next few weeks.

Well, let save the nice smooth app advertisement for later on, For time being, here is a short introduction from the developer perspective.

The Story Of A Developer With Passion For Literature:

Once upon time, there was a seasoned software developer and an architect who had passion for literature. He thought that it would be fun to create some apps on Persian ancient and beautiful literature!
And so he thought it would be easy, since he had designed and developed multiple complex OSS/BSS (Operating Suport Systems & Billing Support Systems) for Telecommunication Carriers and GIS systems Electrical Power Generators in Renewable Energies for many years.
But it wasn't! (Smiley Face!),, .. I'm kidding, just making a bit dramatic.
Here is the main page: 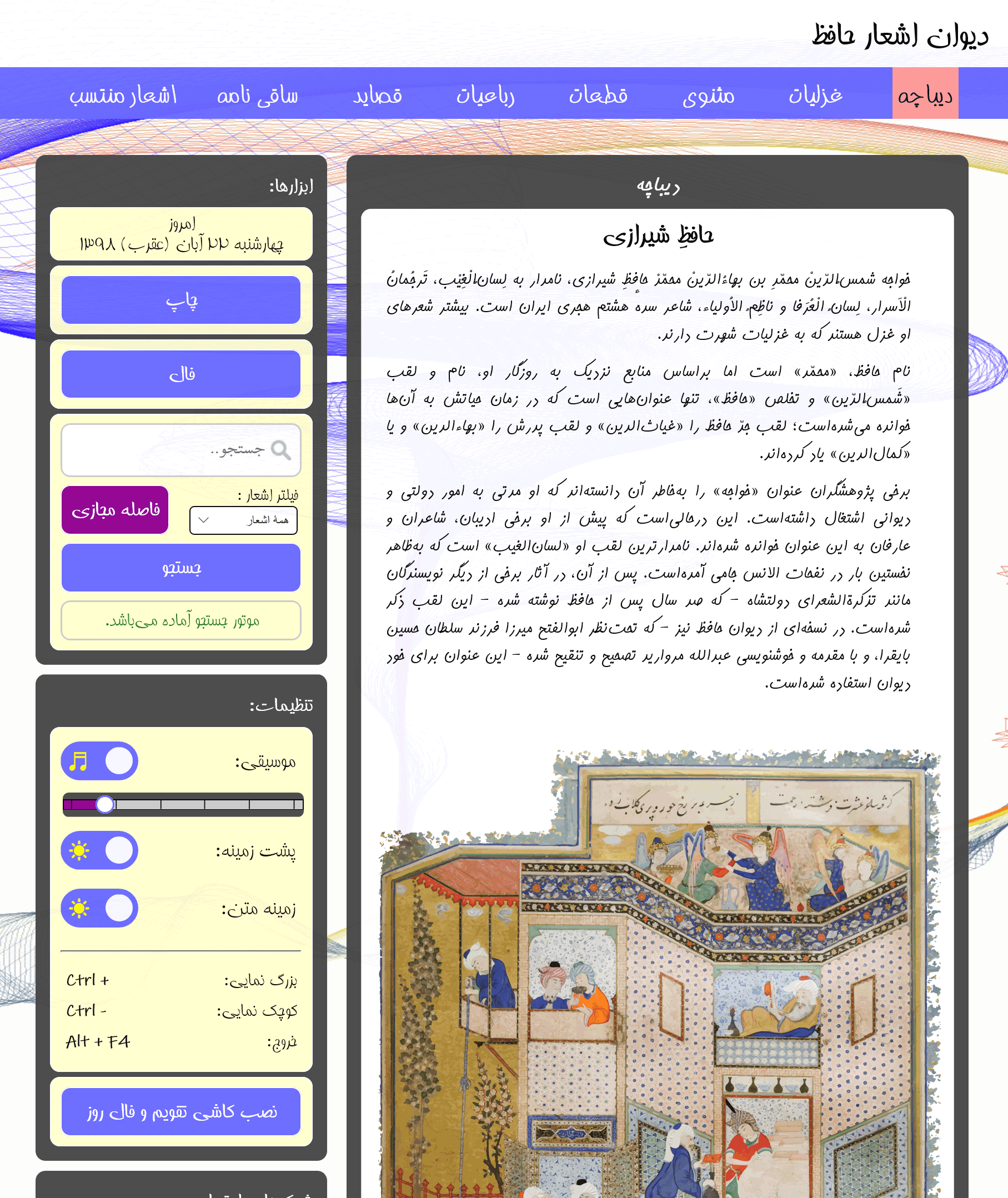 I started developing this app 2 or 3 years ago as a hobby and a weekend project.
This app is a good example of what Microsoft calls a modern UWP (Universal Windows Platform) app, there is a lot of arguments there but what made it so long and frustrating to publish, a part of being a weekend project, it was the major change of heart in Microsoft strategy about a year and half ago on subject of JavaScript based UWPs.
You see we have two types of UWP, C# base and JS based, "Divan Hafez Shirazi" was initially designed to be JavaScript UWP using WinJS which back then was a shiny and well-advertised Microsoft Platform, but unfortunately Microsoft changed its strategy and shut down the entire JS UWP Platform.
Which I don't blame them for by the way. -The JS platform wasn't well thought or designed and there were a lot of bugs!- But what I'm blaming them for it the fact that they stopped supporting it far too early, JS UWPs were introduced in VS 2015 and supported in VS 2017 but in VS 2019 you can't even open them!!

Anyhow, I decided to switch the project to good old fashion C#, and after a long delay and a lot of do overs, voilà!
The re-designed app is packed with all new Windows 10 the features & functions such as Toasts & Notifications as well as beautiful Live Tile Feature which works as a Persian calendar and presents a daily poem to user. 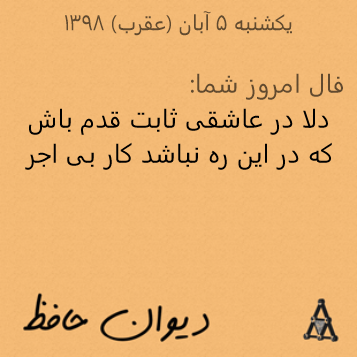 It can render poems into images and let you save it, or by use of its very well integrated social networking (Facebook or Twitter) feature, you can post these images online! (For bookworms & nerds, isn't it awesome!)

Big Note: For those of you who don't know Facebook doesn't allow direct photo load from apps, so I had to support posting images to facebook via Web meaning I had to create over 16000 images to support this function!
Here is what it is look like on Facebook: 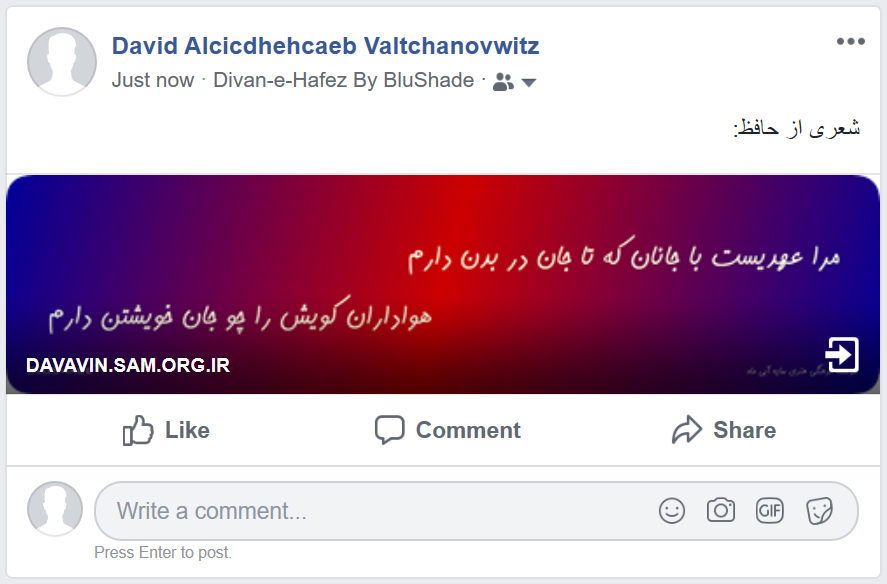 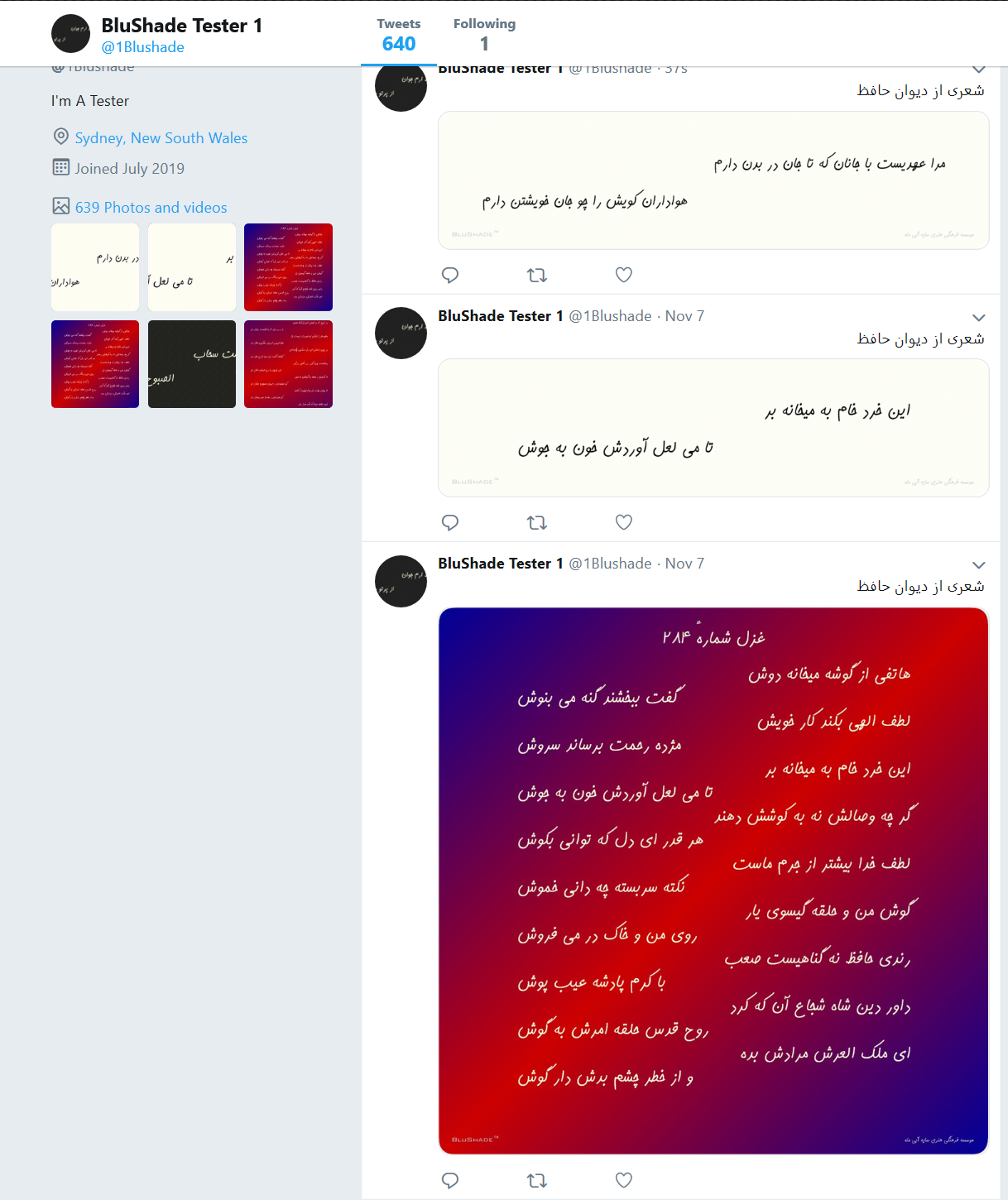 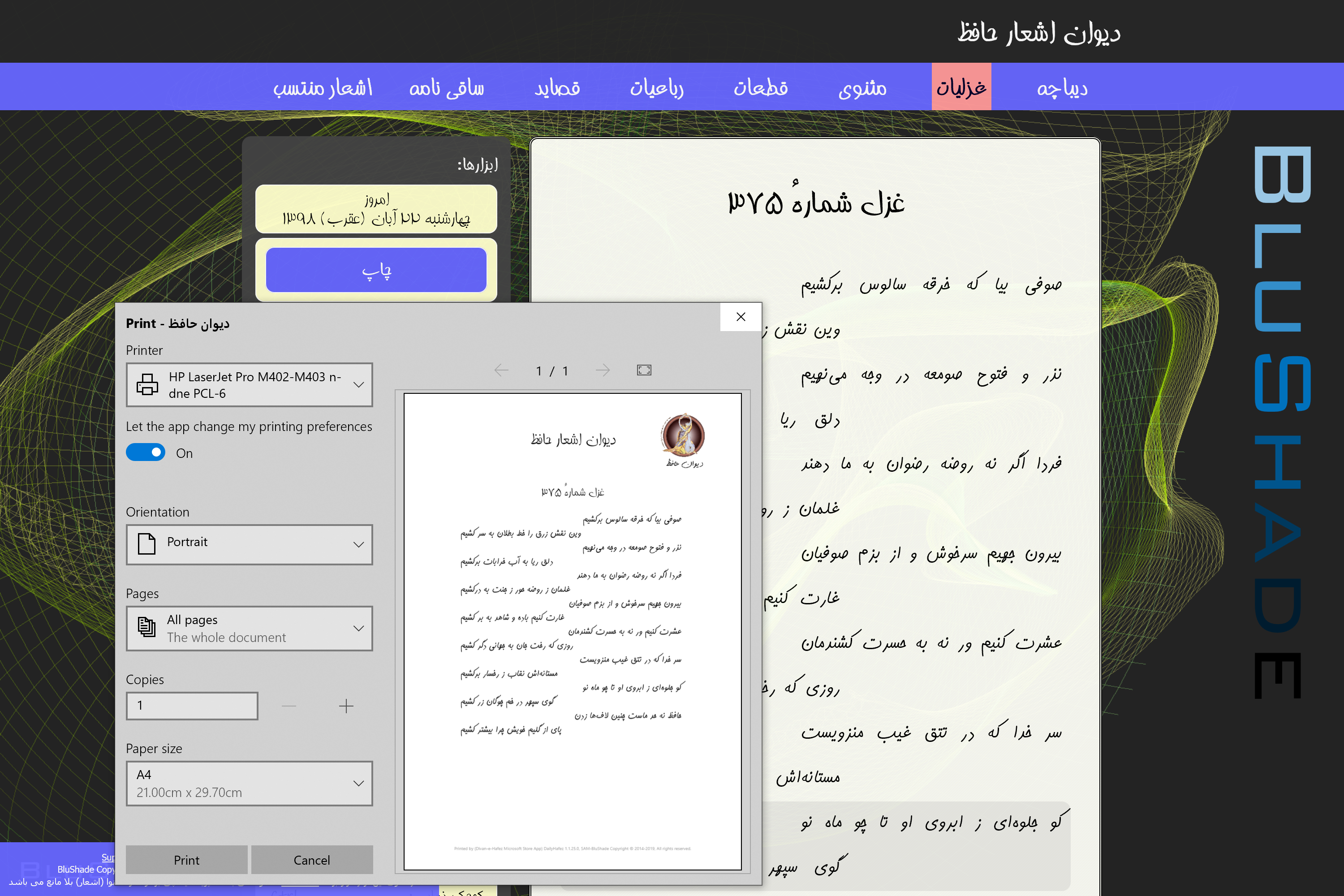 But the most important function of this app is the ability of it search engine! It is all done in JS!! Can you believe it! 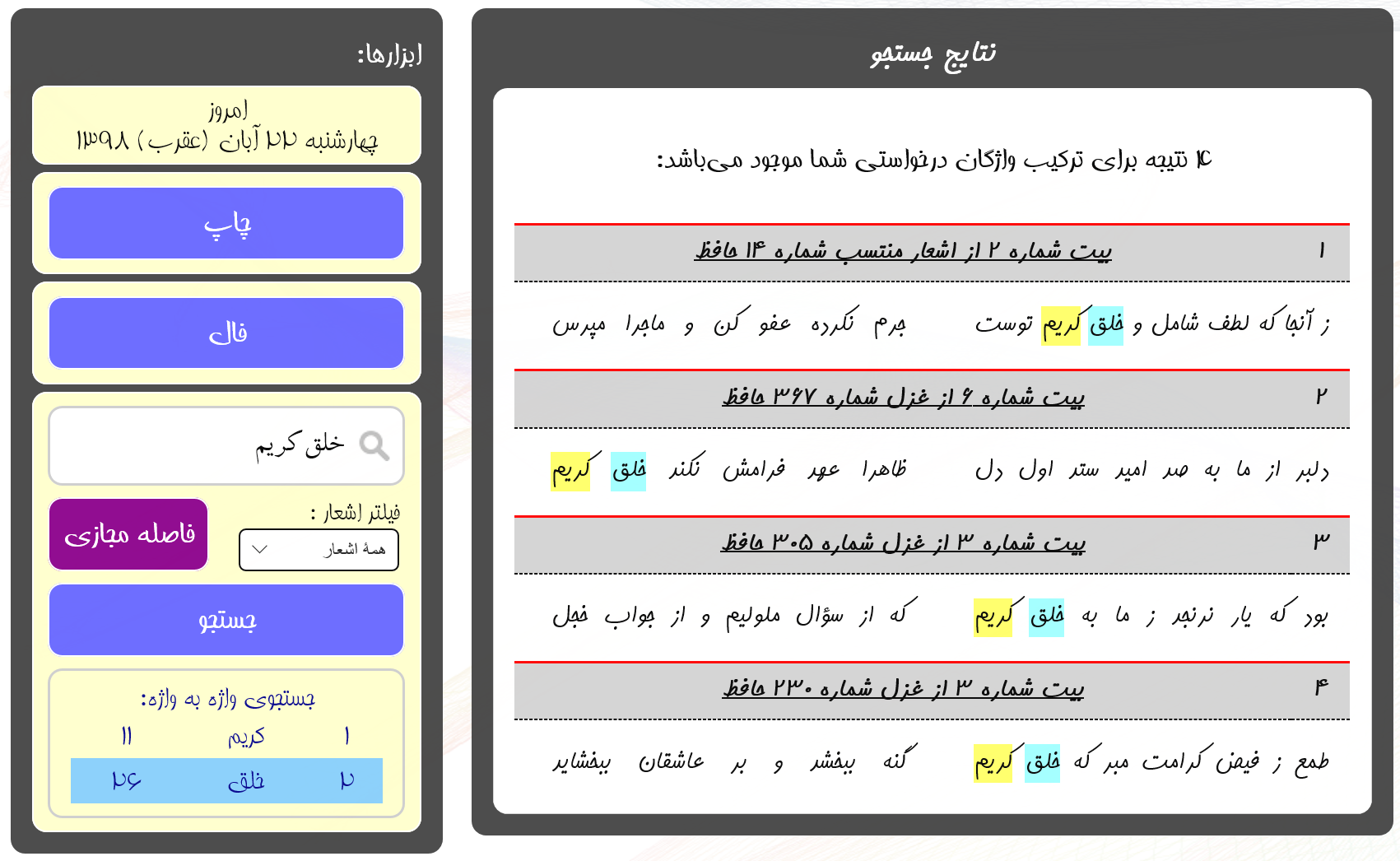 I'll write more about it once it is out (hope fully in its own web site!),

Thanks for reading this, Cheers.
Seyed Hani Mohajerani


If you are a CEO and your business is growing bigger than 50-70 employees you might need to look into the idea of having an Enterprise Architect on board.
For many businesses Enterprise Architecture is a new thing, though it is a type of architeture but the addition of the word "Enterprise" extends the coverage of architecture to span both IT and the business realm - including the company stracture, organization units, EA FrameWorks, Mission, Value Chain, Strategy, business functions and business processes, which together describe and define the nature of an enterprise.
The business-level description may or may not include the application of IT.
Enterprise also implies the entire breadth of the enterprise, as in enterprise wise architecture (and not project wise architecture).
This is added to the traditional architectural coverage of information, or "solution" architecture and technical architecture.


We do offer a consultancy service on Enterprise Architecture as well as traditional Software Architecture with the focus on our clients' Enterprise Architecture, Enterprise Maturity, Products Road Map, Strategy Development, Organization, Operations, Future Vision and Technology, Transformation, Mergers & Acquisitions and Sustainability across IT and Media Industries and all geographies.
We bring deep, functional expertise with a holistic perspective.

Buy us a coffee (Donations):